Aug 27, 2019 Behind the Lens on The “Bad” Brad Berkwitt Show with Retired Boxing Trainer Dennis Hardesty 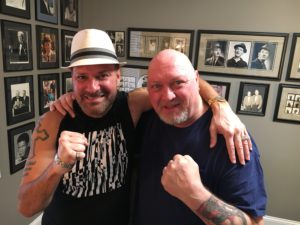 If laughter is the best medicine, then I think that Brad and Dennis may have overdosed. The two of them are hilarious, and it was a pleasure to shoot this show. There was genuine rapport among the two of them, and a lot of it was because they have similar values. Dennis is a very generous, giving person, and those qualities are endearing to us.

Dennis is a local retired boxing trainer, and he has a very full history of training professional athletes in the Northwest Indiana area. His boxing legacy has been passed down to his son, who’s a coach in Omaha Nebraska. I found it interesting when Dennis said that his son’s style of coaching was a bit different than his was. A lot of times, we as parents think that our children must follow our steps verbatim, especially if we have attained a level of success in a given field. This isn’t always the case. Dennis said that when he discussed training styles with his son, and their difference of approach, his son remarked that his fighter was winning. The proof is in the pudding. Dennis’ take on the matter is whatever works.

Another thing that I appreciated about Dennis was his willingness to learn from others. He said that he paid attention to other people’s training methods and took a little bit from each of them to make his own unique style. I am always attentive when people reveal this, as I have seen instances where people feel that they have things figured out on their own and show no interest in learning from others. I am often baffled when I observe this, as we have a wealth of experience in our midst and wisdom would dictate that we tap into such experience, but some people are not inclined in this manner. I’ve always thought that it’s a waste of energy to reinvent the wheel.

Another thing that struck me from this interview was Dennis’ strict adherence to safety in the gym. Ruben Galvan also a recent guest on the show told us that Dennis insisted that the fighters wore headgear while training. In retrospect, this was a wise call, as Dennis stated that most of the physical after-effects of boxing occur due to training. Some fighters leave everything in the ring during sparring bouts, and those blows can be cushioned by wearing safety gear. Good advice for those considering an amateur career in boxing.

As Brad and Dennis wrapped up the interview, and Brad asked Dennis to describe himself as a person, Dennis stated that he was a kind guy. I really appreciated this. I value kindness and am saddened by the fact that it is a waning quality in today’s world. My admiration is deepened when Dennis responded that the saying that he lives his life by is to “do unto others as you would have them do unto you”. Simple yet profound words. If everyone in our society would treat others as they would like to be treated, how much more harmonious would this world be? There would be no road rage, there would be no violence, there would be no strife. If each of us would operate under that mindset, communities, cities, states, nations, and the entire world would be a better place!

So, in closing, there are two main takeaways from this Behind the Lens. First, it’s important to laugh! Laughter is a universal language and it enables people to bond with one another. It serves as a bridge for people to form lasting relationships and forge life-long memories. We should never forget to laugh with one another.

So, when you look at the interviews of former boxers, former trainers, or any one for that matter, try to peer beyond the obvious. The experiences that these athletes and coaches share with us should not go to waste. There is a wealth of learnings that we can glean from these accounts if we are willing to accept them.