Aug 27, 2019 Behind the Lens on The “Bad” Brad Berkwitt Show with Alex “The Barber” Marchuk 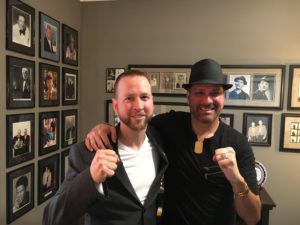 The “Bad” Brad Berkwitt Show took a bit of a departure when Brad interviewed Alex “The Barber” Marchuk of Crown Point, Indiana. I thoroughly enjoyed this interview, and was excited to put my thoughts on paper, because there is so much to share. Alex is engaging, enthusiastic, and talented. He spoke of his childhood, his family, his career, and he is truly a joy to be around.

Alex was very focused and driven. He wanted to study barbering and pursued it despite hurdles that were in the way. He went to barber college in 1995 in Indianapolis, Indiana and came out ready to take on the industry, recently purchasing the barber shop and building where he runs his business. When asked what advice he would give someone considering going into barbering, he gave some very sound words of wisdom: be patient and be professional.

Alex isn’t giving any advice that he hasn’t taken himself. He spoke of a time where he was trying to build his clientele. It wasn’t easy, but it was worth it. In time, he built a solid, reliable base. Much of it is due to his professionalism and his genuine interest in people. Those qualities are beneficial to people involved in his industry, but they also go a long way in all areas of business. In a time where professionalism is so very much lacking, it’s refreshing to see someone who not only prioritizes professionalism but has made it a core value.

Along with this, a person must know their worth. If a person devalues themselves, others will follow suit. People who appreciate good service don’t have any issues with compensating others accordingly. I would much rather pay more for good service, dependability, and a person who is genuinely concerned about me than a person who feels that I am simply a number. Customer service is invaluable.

A person who wants to be successful in business should also offer something that their competitors don’t. Find a niche. This might require a degree of personal sacrifice, but it will yield rewards. In Alex’s case, he is willing to work later hours than the other stand-alone barber shops. He offers consistency in servicing his clients. This sets him apart from his competition.

As passionate as Alex is in performing his craft, he stated an important fact that eludes many people today. He stressed the need to be balanced. He said that on his tombstone, he wanted the inscription to read: “travelled the world, made new friends, had lots of experiences”. Brad and I often talk about the importance of travel. Travel is equivalent to education. A person learns to appreciate other cultures, to appreciate their own culture, and becomes more open to different ways of doing things. In my opinion, this makes a person more well-rounded and more versatile. Some people struggle with interacting with other people who may not speak the same language or have the same beliefs that they do. Some people truly don’t know life outside of their little towns. This limits a person; at times sinking the person into a very narrow approach to life. In today’s world, narrow-mindedness paralyzes a person, with them never growing or learning new things. Not my ideal of a happy life.

There were so many learnings from this interview! So many thoughts that inspired me, and hopefully, inspired you too.

In a world where people lack appreciation, devalue growth, don’t know their worth, are stuck in their mindsets, and struggle with balancing work and family, consider the example of Alex Marchuk. Alex grew up in a small town but embraces different cultures. He worked hard to achieve his goals and loves what he does but values his family and spending time with them. He holds customer service as a value, and genuinely cares for his clients.

Actress, Writer & Activist Lydia Cornell is the Special Guest Thursday September 29, 2022 on The “Bad” Brad Berkwitt Show for a 360 Conversation

Noah Kinsey Host of #TheCoffeeTime Podcast is the Special Guest Wednesday August 31, 2022 on The “Bad” Brad Berkwitt Show for a 360 Conversation