Aug 16, 2019 Behind the Lens on The “Bad” Brad Berkwitt Show with Retired Boxer Ruben Galvan 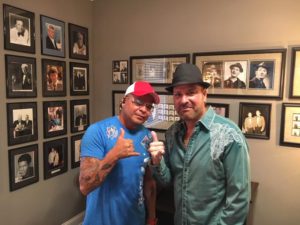 Boxers desire to possess strength. This strength can be a useful tool for gaining victory over opponents. But there is a type of strength that is more enduring than that of physical strength, and if one possesses this type of strength, it can help to overcome the most formidable of opponents, and even multiple opponents of differing natures.

Ruben Galvan possesses such a strength, and I could not help to realize this by some of the things that were discussed when Brad interviewed him recently. Honestly, I was very eager to put my thoughts on paper, because he is such a strong person, and in hearing of his experiences, I had a burning desire to share them, as I know how beneficial it would be to many people who I know and love dearly.

Ruben has the type of strength that enables him to have a set of values and remain true to those values despite the things that may be occurring around him. He shared with us that he does not use foul language, he does not drink, he does not smoke, and he has never used an illicit substance. What I appreciated most about him was, despite his strong convictions, he never sat in on judgement of others. He serves as a positive force for those who know and love him, yet his resolve to maintain his value system attracts people who may not be so resolved. Regardless of how others may view him, he maintains his staunch mindset that no one would steal his joy!

We should ponder this thought for a minute. Human beings are innately designed to connect with one another. This is obvious by the fact that we can communicate. We have the ability to share our thoughts verbally, we can share our feelings through our body language, and we can express approval or disapproval with so much as a glance. Those feelings and emotions are contagious! If someone is happy, that happiness can be received by others who are in association with the person. If a person is sad, likewise, this emotion can be exchanged with others. Positive energy or negative energy can spread like a virus. This can be good, or it can be bad. Having the ability to repel negative energy is not only a strength, it keeps us emotionally healthy.

As Brad questioned Ruben about a person who he would like to have met, and a line of conversation that the person would have been Jack Johnson. People who have a knowledge of boxing will recognize that name, as he was an African American boxer who lived in the height of the Jim Crow era. Not only did Johnson face tough opponents in the ring, but he faced a very wicked, formidable foe, racism. Ruben was curious as to how Jack was able to not only survive but thrive in an era where people were against him. Once again, proving that strength can be other than physical.

There were other things that he shared during this interview that I appreciated. I admire people who are dedicated and committed to the activities that they chose to engage in. Ruben is a self-described part-time fighter, yet he approached it with a full-time mindset. He spoke of a time when he was summoned to fight Julio Cesar Chavez, JR. on a few days’ notice. Now, many people would not have taken that fight. Ruben’s mindset, however, was the opposite. He felt a sense of commitment to his sport, even putting aside personal pursuits to fulfill obligations. And, along with his strong sense of work ethic, Ruben possessed a humility that surely endeared him to both fans and promoters alike. He warned up-and-coming fighters against a mentality that is prevalent today, being overly demanding. He advised that he was basic. He didn’t need the frills. And because he was so easy to work with, he was a busy fighter. Society could use more people with this mindset. The dedication and commitment that he possessed should be a model for young athletes to follow, regardless of the sport.

In closing, I will say this……. we all have different personalities. Some people are reserved. Some people are outgoing. Neither is all wrong or all right, but for those who have the courage to reach out to others, to engage a person who they may not know, there is always a reward of sorts for stepping outside of self-imposed boxes. In talking with people who have different experiences, we may open a wealth of learnings that we may not have reflected on or we may not have appreciated. It is so much easier to see the qualities of others than it is to reflect on those of our own. And when we see those qualities, perhaps if we reflect on them for a bit, we might use those qualities to better ourselves. Seeing Ruben’s strength, seeing his humility, seeing his dedication, seeing his commitment, and seeing his resolve has inspired qualities in me that may have become buried in the grind of life and making a living. I admire Ruben. I admire his steadfastly maintaining his value system. And I appreciate the way he does it.

So, if you too have had certain qualities that you held dear, but may have become tarnished through time or trial, take some time to hear of Ruben’s experiences. Dwell on the things that he reflected on. I assure you that you will be as inspired as I am.

(Postponed) Author Frank Figliuzzi of the National Best Seller “THE FBI WAY” Returns to The “Bad” Brad Berkwitt Show to Discuss His Book on Thursday May 26, 2022 – Breaking News