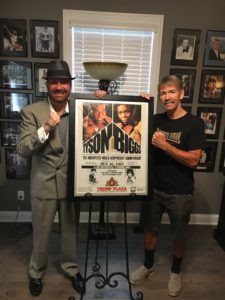 None of us know who we might inspire. We may not realize the positive impact of our perseverance. We may also fail to realize how many things in life come full circle. In the day to day running of our lives, we often don’t stop to ponder on things because we are busy. I chose the word “ponder” as opposed to “think” because, in my opinion, it denotes a deeper concentration, something more than the obvious, something that is reflected on, analyzed, mulled over, and perhaps it is then that we might glean a point that might have gone unnoticed.

Brad interviewed former professional fighter & world title challenger Jack “The Kid” Callahan recently, and I pondered on some of the things that they discussed. Brad asked Jack about the shirt that he was wearing, which happened to be a Roberto Duran shirt. Jack responded that Roberto Duran was his favorite fighter and the reason why he started fighting.

This was profound for me.

Roberto Duran is from Panama. His English is limited. The fact that Roberto Duran was Jack’s favorite fighter reveals a lot to me. There was something that Jack saw in a man who he, if face to face, would have limited ability to communicate with, that moved him immensely. Perhaps it was Duran’s toughness. Perhaps it was his versatility. Regardless of the reason, the way that Duran conducted himself impacted the life of a young man who lived thousands of miles away from him and introduced to him involvement in a sport that got him over some very difficult parts of his life.

Coping with life’s difficulties are often the subject of many people’s conversations. We all respond to these difficulties in different ways, but the one thing that remains constant is that we can often look at those who have navigated through those difficulties as a model. We can look at the things that they have done or the ways that they cope as an inspiration to how we can do the same. While we may not mimic their path step by step, we can mimic their method to getting through those times.

Jack stated that both boxing and training others to box got him through some of the most difficult times of his life. We are not all boxers, but we can glean something from his experience. When we are going through difficulties, find a passion, something that motivates you, and immerse yourself in it. Beyond this, help other people. Jack helped others by training them, and he helped his community by serving as an Assistant Fire Chief, starting as a firefighter in 1988. Helping others helps us to redirect our focus from the struggles that we may be facing to helping others. We do need to be balanced in this though, as we do need to fuel our own tanks before we can drive others to their destination. A physical outlet may also help us to redirect energy, and to be able to release those feelings that we desire to rid ourselves of. All difficulties are not a sprint, some are a marathon (Jack ran marathons too!), so we must pace ourselves accordingly.

Another thing that I appreciated about filming this interview is the humility that Jack possesses. This man fought for the IBF Jr. Middleweight Championship of the world, yet he is such a humble being. He said that he adopts different training techniques, even searching for the best techniques on a regular basis. I know many people who have been in professions for a very short period of time, yet they are unwilling to look at methods other than those that they currently possess. Jack has been around the sport of boxing for decades, and yet he is willing to continue to evolve.

So, if you are fortunate enough to be trained by Jack, or you’ve been fortunate enough to have received his assistance as he responded to an emergency, realize who you have or have had in your presence. You’re rubbing shoulders with a man who is both physically strong, and emotionally strong. You’ve been graced with the presence of a man who has been at the top of his chosen profession, and whose goal is to get others there. You’ve associated with a man who is motivated, energetic, and honest.

In this world in which these qualities are waning, you are in the midst of a championship.

Actress, Writer & Activist Lydia Cornell is the Special Guest Thursday September 29, 2022 on The “Bad” Brad Berkwitt Show for a 360 Conversation

Noah Kinsey Host of #TheCoffeeTime Podcast is the Special Guest Wednesday August 31, 2022 on The “Bad” Brad Berkwitt Show for a 360 Conversation