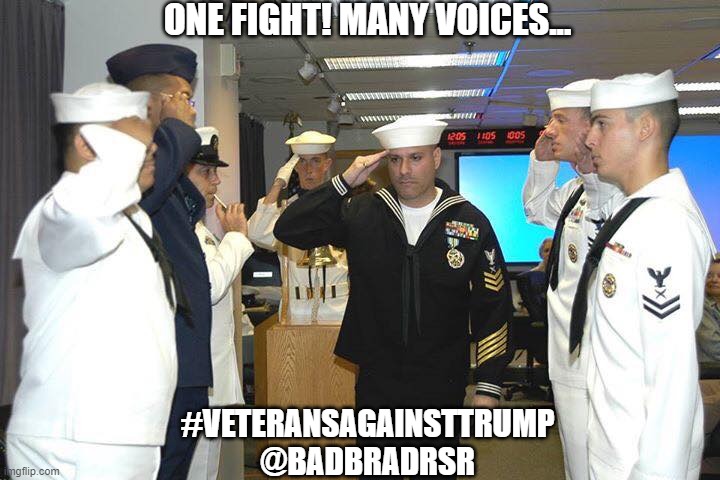 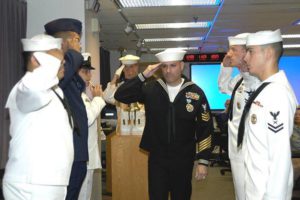 My fellow Americans… I come to you today in this column as a retired Navy man who served for 20 years and 28 days in the US Navy, honorably during war and peace time, from September 2, 1986 – September 30, 2006. I am disgusted with Donald J. Trump’s racist, homophobic, xenophobic, and being a traitor to the USA, a country that with all it’s warts, I still love…

A country that right now is in dire straits with the Coronavirus attacking and killing far too many of us along with our fellow human beings around the world! During this pandemic, Trump has taken to the “Bully Pulpit” not for good, but to actually “bully”, tell lies and do what he does best, blame the former President who as we know was Barack Obama! 3 ½ years into a failed embarrassing tenure as President, Trump is still blaming the last President of the United States! I have never in my almost 52 years on Planet Earth seen either a Republican or Democrat President and there has been 10 of them, blame the previous one at every turn this late into their first term!

There are so many things Trump has done that enrage me as a human being who has compassion for other human beings, but I would be here writing for weeks and I just don’t have the time to do it. However, I will discuss a few high on my list of reasons I despise the most evil person I have ever seen and trust me when I say, I have lived around the world and seen many evil ones!

Let’s start off on July 18, 2015 during Trump’s campaign to become the Republican Presidential nominee. At the Family Leadership Summit in Iowa, where he refused to call Republican Sen. John McCain a war hero. Trump said, “He’s a war hero because he was captured. I like people that 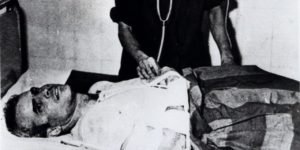 weren’t captured.” This coming from a draft dodger who when he was 22 years old standing 6 feet 2 inches tall and an athlete — had already avoided the military draft four times in order to complete his college education and by the time he was about to graduate, received a diagnosis that landed him a fifth draft deferment that would once again, keep him out of Vietnam: bone spurs.

Now look, we all know many rich and privileged kids did the same thing during this time. However, none of them especially Trump, have a bone spur or whatever fake condition has the right to ever attack a true “War Hero” like the late Senator McCain is! A man who loved his country, and couldn’t even raise his arms to comb his own hair due to the torture he endured for 5 ½ years at the Hanoi Hilton.

This statement alone should have ended Trump’s run for the presidency, but of course, it didn’t!

Then on October 7, 2016, the Washington Post published a Hollywood Access video from 2005 of Donald Trump and host Billy Bush where in the video, Trump described his attempt to seduce a married woman and indicated he might start kissing a woman that he and Bush were about to meet. He added, “I don’t even wait. And when you’re a star, they let you do it. You can do anything. … Grab them by the pussy. You can do anything.” Commentators and lawyers have described such an action as sexual assault. Many in the Trump camp wanted to push it off simply as male locker room talk. I myself have spoken in male locker room talk and not going to sit here to say it was right. However, I have NEVER said “because who I am, I could have sex with a woman or grab her”, nor have I ever done that! Trump’s comments crossed the male locker room talk line and was in fact, sexual assault! That right there should have ended his run, right? No, it didn’t as we know!

In addition, the new was two days before the second 2016 presidential debate between Trump, the Republican nominee, and Democratic nominee Hillary Clinton. Trump gave a statement in which he apologized for the video’s content, but attempted to deflect attention by saying that Bill Clinton had “said far worse to me on the golf course”. The recording provoked strong reactions by media figures and politicians across the political spectrum. Statements from Republican officials were varied. Some, including Trump’s vice-presidential running mate Mike Pence, Senate Majority Leader Mitch McConnell, and Republican National Committee Chairman Reince Priebus, indicated their disapproval of Trump’s words but did not renounce their support or call for his resignation from the ticket.

Other Republicans, most prominently former presidential nominee John McCain, stated that they would no longer support Trump’s presidential campaign, and some called for his withdrawal from the ticket. House Speaker Paul Ryan announced that he would no longer defend or support Trump’s campaign, although he did not officially retract his endorsement of Trump. Bush was fired from his position as a host on NBC’s Today Show, while Trump received allegations of sexual misconduct from several women. 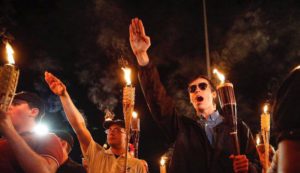 Fast Forward to now President Trump. On August 12, 2017 when you had scumbags with tiki torches marching in Charlottesville, VA screaming out, the “N” word, while also wearing Nazi bands around their arms along with, screaming “Blood and Soil”, Jews will not replace us! (Note: Blood and soil is a nationalist slogan expressing Nazi Germany’s ideal of a “racially” defined national body united with a settlement area.)

Heather Heyer, 32 was a protester against these scumbags who was killed when one of them drove their car into the group she was protesting with. The car was driven by white nationalist James Alex Fields, JR. who was convicted of First-Degree Murder! This scumbag got life in prison. On August 15, 2017, Trump went in front of the world with several of his cabinet standing behind him to say, “you also had people that were very fine people on both sides.”

Really? Are you kidding me Trump? People screaming racist garbage and wearing Nazi bands are anything, but “Fine People”. Now let me be very frank! Though I despise these people, this is America and like I do, they have the right to spew that garbage. A right I defended during my time in the military! But they don’t have the right to kill someone and the President finding any good in them, shows you exactly what he is.

Let’s continue… On September 22, 2017, at a Trump rally in Huntsville, Alabama Trump encouraged owners to cut ties with NFL players who participate in national anthem protests and said, “Wouldn’t you love to see one of these NFL owners, when somebody disrespects our flag, to say, ‘Get that son of a bitch off the field right now! Out. He’s fired! He’s fired!’ Once again, in the America I defended for 20 years and 28 days in the US Navy, you have every right to voice your opinion for or against those taking a knee in the NFL. But see, here lies the problem.

Trump supporters who “claim” they are Americans don’t think the players have that right and Trump doesn’t either. Well, my fellow Americans when you allow one group to take away the rights of another group just because you don’t agree with them, then you have no rights when they come to take away yours. That last line was said by my late father, Alvin Frank Berkwitt on a segment of the NBC Nightly News on June 2, 1977. Almost 43 years later, dad is still spot on!

Here was a watershed moment in our country on race. The black NFL football players were taking a knee to bring social awareness to police brutality against people that looked like them in our society. A true leader, which I do consider myself and displayed during my tenure in the military would have invited black NFL players and others on the opposing side to the White House to talk about their feelings and what could be done to change things in America for the better. That’s what leaders who have compassion and sense do. These are two traits Trump has none of!

Instead as he continues to do through this day, he attacks “People of Color”.

I will list one more point about Trump that disgusts me so I can close out what has the potential of being a 20-page column.

Many who take up for Trump that I know or have come across, love their mothers, wives and daughters. The evil things Trump has said against women many times as a civilian and as a President, along with the disrespect he has for them, would have these people I know snatching a knot in any man who said that, but when I remind them it’s Trump, they give him a pass! Well, my fellow Americans, I was raised by a dad who taught me to respect women always. To have loyalty to people who have it to you and honor your word. These are traits that not only does Trump not have, but cannot even fake it.

I started out talking about Trump’s mishandling of the Coronavirus to include lies and bullying, that he does on a daily basis. These are not traits of leaders, nor decent human beings. Wake up America and even if you voted for Trump because you were duped, you must hold him accountable and vote him out of office and all that he represents. That is what a true American does!

Instead of MAGA, a slogan I never liked which Trump means as going back to to a time of Jim Crow Laws and other BS in our country that was wrong! We should have a political slogan of KAMF (Keep Moving America Forward).

To anyone reading this, I will close with my saying I live my life by.

“Every Act Of Kindness Is A Little Love We Leave Behind”.

“Bad” Brad Berkwitt is the Special Guest on the #TheCoffeeTime Podcast with Noah Kinsey on Wednesday August 24, 2022