Aug 13, 2019 Behind the Lens on The “Bad” Brad Berkwitt Show with Former Professional Fighter Carlos “The Force” Tite 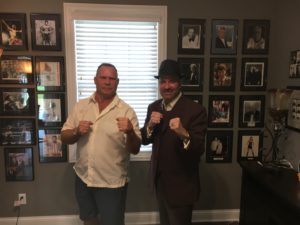 “Treat people how you want to be treated.”

What a profound statement. Unfortunately, this value has been lost amongst so many in our modern era. Too many people lack the consideration, compassion, and empathy to live their lives by these words, and yet, if people are balanced, and treated others how they want to be treated, how much more peaceful would this world be.

Recently, Brad interviewed retired middleweight fighter Carlos “The Force” Tite, and those are the words that he lives his life by. Carlos is beloved in Northwest Indiana, and I can see why this is the case. Although he fought in the 80’s, people still know him, remember him, and love him. The reasons are obvious.

Naturally, we’d all like to be regarded highly amongst our peers. And there are several qualities that we can cultivate that will endear us to others. One of those qualities is appreciation.

Many times, when people achieve a level of success, they tend to minimize the role that other people play in attaining it. They may forget the energy that others put into their development, instead taking all the credit for it themselves. Carlos is not like this. When he spoke to his fans, telling them that he could not have been what he was without him, he showed the upmost appreciation for the support that he received over the years.

Honesty is another quality that draws others to us. People appreciate those who are honest, because most of us value the truth. I thought that Carlos was very honest when he spoke of his last fight. He had been inactive for some time and wanted to see if he had anything left. He fought an opponent who wasn’t as skilled as he was. He didn’t feel good about the victory. He said that he did not want to take a fight just to win. A lot of people would laud the victory, using the fact that there was a ten year lay-off to justify this. Carlos was honest with himself, and honest with Brad about the magnitude of this fight. In a world that people are more worried about statistics over substance, this is refreshing.

Another thing that I appreciated about Carlos is his humble nature. He and Brad reflected on a humorous story about his first day as a Boilermaker, and the response of one of his coworkers. The coworker wasn’t as accommodating to Carlos as he could have been but was quickly recalibrated when he was told who Carlos was. Again, I will remark that this is refreshing. Who of us hasn’t experienced people who are full of themselves? There was no “do you know who I am? I’m Moe Greene!” (famous line from The Godfather) moment with Carlos. Humility is certainly an attractive quality. To know that a person is in a position to force respect but chooses to earn it makes me respect that person all the more so.

Last, Carlos had the reputation for always giving 100% in all of his fights. Work ethic! Another quality that is appreciated but waning today.

As I peer behind the lens, I listen for things that people who compete at a high level and participate in a sport that requires a high level of discipline, dedication, and stamina. My personal learning and advice to others is to look beyond the obvious. There is a difference between mediocrity and excellence. To attain excellence, sacrifice is a must. A person must sacrifice time, and with boxing, their bodies, to reach the next level. A person must be honest with themselves as to their progress and where they would like to be. Finally, a person must be appreciative, learning to realize the role that others play in their successes, and expressing this.

All of these things I gleaned in listening in as Brad interviewed Carlos. Beyond his moniker, “The Force”, he truly is a force to both be reckoned with, and a force for good.